In 2018, Belarusian dictator Alexander Lukashenko radically restructured the country’s tobacco industry to benefit his close crony Aliaksei Aleksin, who until then had been better known as an energy tycoon.

Just months after receiving these favors, Aleksin made a pricey gift of nine cars and motorcycles to Lukashenko’s bodyguard service, OCCRP has found. The donations, worth an estimated $1.5 million, were discovered by analyzing a new leak of Belarus’s vehicle registration database obtained by Cyber Partisans, a group of pro-democracy Belarusian hackers.

Lukashenko has been seen riding in vehicles that closely resemble those donated by Aleksin, including a vintage 1967 GAZ-69, a classic Soviet car that he used to give a personal tour of his hometown to Russian President Vladimir Putin.

“When luxury vehicles are being bought for political figures or institutions, that resembles a Russian-style kickback […] In a democracy, this would be followed by resignations and scandals. In Russia or Belarus, this is a daily routine,” Maliukevičius said. 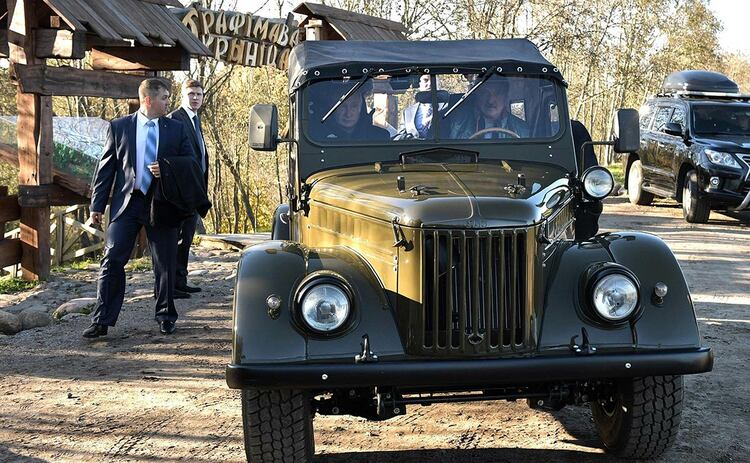 Belarusian President Alexander Lukashenko gave his Russian counterpart, Vladimir Putin, a tour of his home village, Alexandria, in a vintage 1967 Soviet GAZ-69 on October 12, 2018. The car appears to be the same one.

Aleksin declined to comment on the car donation. Lukashenko’s administration did not respond to a request for comment in advance of publication.

Until recently, the Belarusian tobacco industry — which centers around the large Neman Tobacco Factory in the country’s west — was almost entirely controlled by the state, a legacy of the country’s history as a Soviet republic with a planned economy.

But in August 2018, Lukashenko awarded Aleksin and his company Energo-Oil the exclusive wholesale rights to all the cigarettes made at Neman. Energo-Oil was also given the right to take over operations of the country’s biggest chain of cigarette kiosks, and was granted a rare licence to import cigarettes. Lukashenko even redrew the borders of Minsk so Aleksin could build a cigarette factory outside the city’s official limits, “likely for reasons related to tax evasion,” according to the U.S. Treasury.

It’s unclear why Lukashenko effectively handed one of the country’s biggest industries to Aleksin, who had never worked in the sector before. According to Energo-Oil’s website, the company got involved in tobacco only in 2018.

However, OCCRP previously detailed how the tycoon rose to prominence in the aftermath of a round of EU sanctions on Lukashenko’s inner circle in the early 2010s. Unsanctioned himself, Aleksin was able to keep doing business in Europe.

Shortly after receiving these favors from the regime, Aleksin donated eight vehicles to Lukashenko’s security service on a single day in October. He followed that up with the gift of a ninth car in November

Some of the vehicles Aleksin donated are very valuable or unique, including:

The motorcycles and the three-wheeler may have been for the benefit of Lukashenko‘s first-born son, Viktor, who is an avid biker and Harley-Davidson enthusiast. In 2019, Aleksin even traveled with Viktor Lukashenko to a Russian motorcycle rally organized by the Iron Birds, an international biker club the authoritarian leader’s son had co-founded.

Laurynas Boguševičius, the director of Deals on Wheels, a car dealership based in the Lithuanian capital of Vilnius, estimated the vehicles donated by Aleksin might be worth up to 1.5 million euros (around $1.7 million). He said the two Maybachs were especially valuable, and could even fetch more than the listed price.

“These cars are so rare and so few have been made that their price is as much as the seller wants,” Boguševičius told Siena. 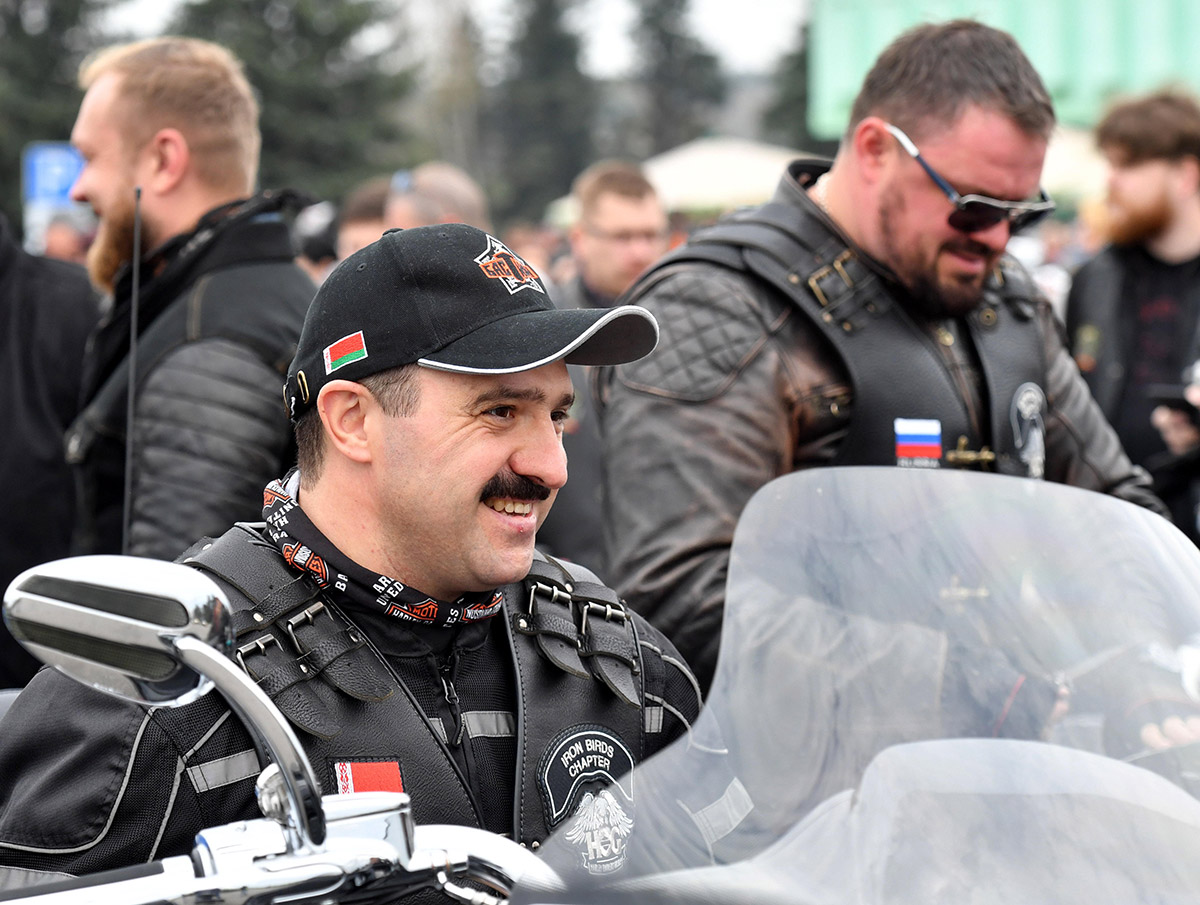 Viktor Lukashenko at a H.O.G. festival for owners of Harley-Davidson motorcycles in Minsk in 2018.

It’s hard to know how much Aleksin might have benefitted from his new monopoly on cigarette distribution since Belarus does not release statistics on its tobacco industry. But profits posted by his main company, Energo-Oil, suggest the sums at stake are substantial. The company, which is in charge of wholesale from the Neman cigarette factory among other businesses, reported 280 million Belarusian rubles (around $115 million) of net profit last year, with sales worth more than $600 million.

At least some of this money appears to be linked to smuggling. The Neman factory has long been infamous for churning out cheap cigarettes that get moved into Europe as contraband. But OCCRP has found that Aleksin’s takeover of the factory’s wholesale coincided with a record-breaking spike in Neman-made cigarettes smuggled into the European Union via Lithuania, which shares a long land border with Belarus.

“In recent years, it has become common to discover 1,000 to 1,500 crates [up to 750,000 packs] of smuggled cigarettes in a single freight truck, which used to be exceptional,” said Gediminas Kulikauskas, a spokesperson for Lithuania’s Customs Criminal Service.

Belarus is also producing far more cigarettes than the country’s domestic market can absorb, raising the question of whether the surplus is intended for contraband sales in EU countries where they are illegal. The Neman factory alone produced over 30 billion cigarettes last year, but cigarette consumption in Belarus was estimated to be just 16 billion cigarettes in 2018, the most recent year for which figures are available.

Since he is now the dominant figure in Belarus’ cigarette sector, Aleksin’s businesses play a key role in supplying cigarettes that end up being smuggled.

“Without the excess production and the monopoly on wholesale, the current system of smuggling could not exist — not on such a large scale at least,” Kulikauskas said.

Aleksin flatly denies any involvement in smuggling. “These are only rumors, and someone is spreading them,” he told OCCRP in a brief phone interview earlier this year.

In response to another violent round of repression against pro-democracy protesters last year, the U.S. followed the EU and Canada in sanctioning Aleksin, noting his “near-monopoly on production of tobacco products in Belarus.”

The U.S. Treasury said he served as one of Lukashenko’s “wallets,” providing the dictator “with funds to likely enrich [him] personally and finance his corrupt and brutal regime.”

In exchange, Aleksin and other oligarchs receive preferential access to state resources, tax breaks, and other favors, creating a patronage network that “sustains Lukashenko’s violent regime at the expense of the Belarusian people,” the Treasury Department said.

The U.S. also sanctioned the Neman factory itself, stating that “Neman brands are among the most common cigarettes smuggled into the EU.” Marius Laurinavičius, a Lithuanian political analyst, said cigarette smuggling appears to be a key part of Aleksin’s business model — but it also benefits the Lukashenko regime more generally.

“Smuggling in such countries cannot be happening without a so-called ‘roof’ [protection] from the government,” he said, adding that cigarette smuggling is a key part of Aleksin’s business, and that the illicit trade benefits the regime.

“He’s doing business for the people who cannot officially be doing it,” said Laurinavičius.

The Belarusian Supreme Court declared on Tuesday a network of informal pro-democracy organizations a ‘terrorist movement’ after some of its members revealed the above information to OCCRP.

The ruling came a day after OCCRP published the above information based on data provided by a group of hackers called the Cyber Partisans.

The Belarusian regime proclaimed Supraciu — the designated network that consists of the Cyber Partisans and two other pro-democracy groups — a ‘terrorist’ movement, claiming its members were involved in plotting acts of terror, such as arson, and bombing buildings and vehicles. Under Belarusian law, such crimes can be punished with up to 15 years in prison.