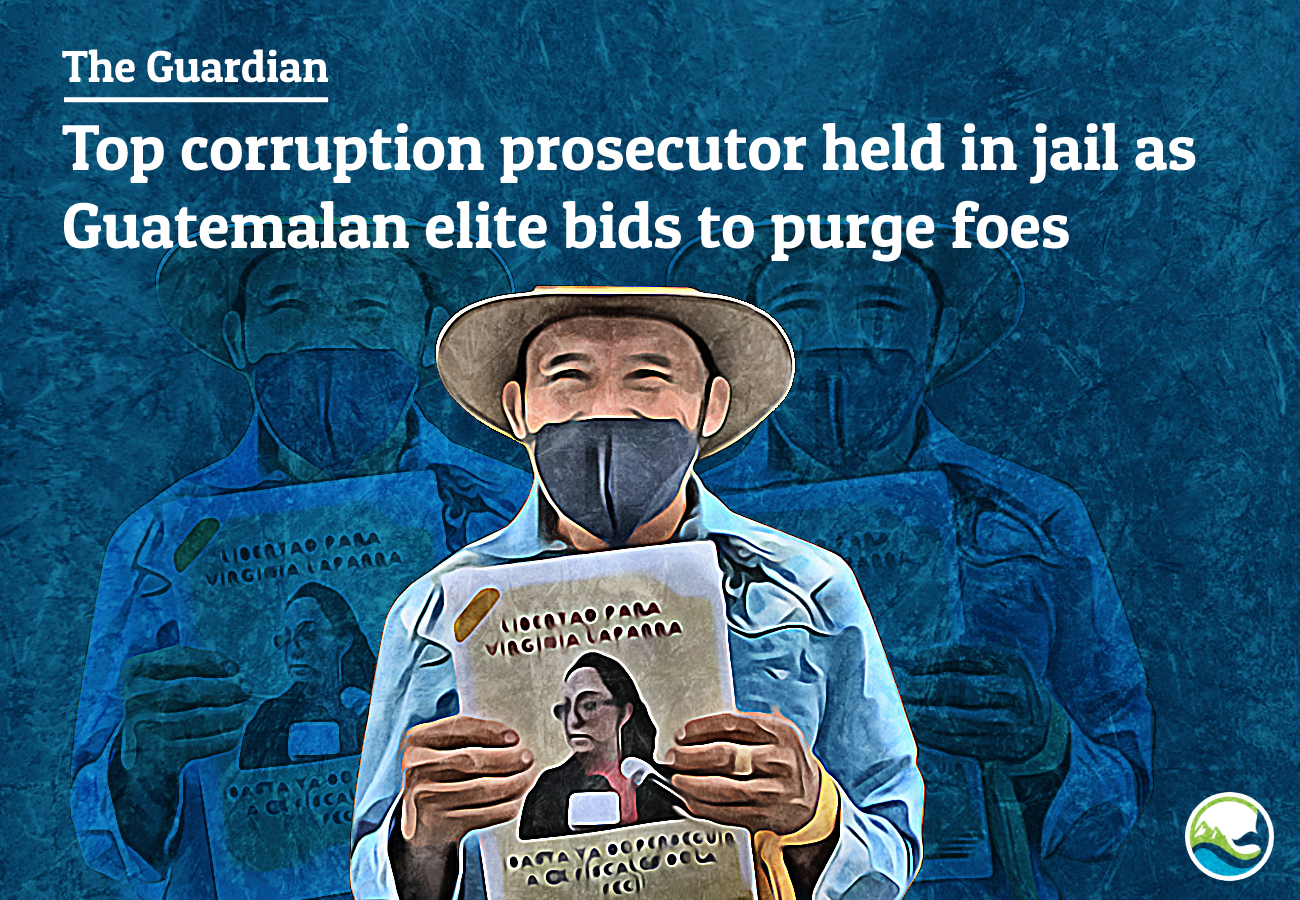 Virginia Laparra detained in conditions ‘bordering on torture’, which critics say is retaliation for her efforts to fight corruption

A Guatemalan anti-corruption prosecutor has been locked up for six months in conditions “bordering on torture”, as the country’s ruling elite pursues a strategy to purge the justice system and derail corruption investigations against their allies.

Virginia Laparra, 42, a senior anti-corruption prosecutor, was accused of abuse of authority in apparent retaliation for reporting her suspicion that a judge had leaked sensitive details from a sealed corruption case to a colleague in 2017.

The judge, Lesther Castellanos, was sanctioned by a disciplinary board, but then filed a joint criminal complaint with the Foundation against Terrorism (FCT) – an extreme-right genocide denial group with a long track record of bringing spurious charges against prosecutors and judges considered adversaries.

The case against Laparra went nowhere until she was arrested in February. A court ordered pre-trial detention, and Laparra was sent from her home in the city of Quetzaltenango to a high-security prison in Guatemala City – 200 miles away from her children – where military commanders and former presidents are jailed for war crimes and corruption.

For the first five months of her detention, she was confined to a small, windowless cell for 23 hours a day – conditions which psychiatrists have told the court border on torture and have caused Laparra psychological damage.

The court has rejected repeated applications for Laparra to be released to house arrest, even though she is charged with a misdemeanour. Instead, the judge recently transferred Laparra to the Matamoros prison, another notorious facility where drug traffickers and gang leaders are held, claiming she was trying to “obstruct justice” by speaking to the media.

Human rights monitors say Laparra’s case is the most egregious in a series of targeted criminal cases against those involved in investigating high-level corruption in Guatemala.

The persecution has been overseen by the attorney general, María Consuelo Porras, who the US secretary of state, Antony Blinken, earlier this year blacklisted on the grounds she “repeatedly obstructed and undermined anti-corruption investigations to protect her political allies and gain undue political favor”.

At least two dozen judges and anti-corruption prosecutors targeted under Porras are in exile, having fled Guatemala to escape pending charges or arrest warrants – including her predecessor as attorney general, Thelma Aldana.

Others, like Laparra, now face jail time as part of a strategy to discredit investigations linked to the International Commission against Impunity in Guatemala (Cicig), a pioneering UN mission which was ousted in September 2019.

“This is a political dispute, not a legal one. It is evident that Virginia’s case is an act of political revenge against the Cicig … [to set an] example of what could happen to those who investigate the powerful,” said Claudia González, a member of Laparra’s defence team.

Laparra, the former No 2 attorney in an anti-corruption unit known as the Special Prosecutor’s Office Against Impunity (Feci), is the only one of the targeted law enforcement officers to be held in pre-trial detention. Protesters demanding her release have accused the court of misogynist discrimination.

“Being in prison is torture for anyone,” said Laparra at a court appearance last Friday.

But there is still no trial date, and the three judges have recused themselves from the case. Laparra will remain in jail at least until replacements are appointed.

Meanwhile, Castellanos – the judge who Laparra had denounced – was elected as a rapporteur against torture a month after her detention. He denied any personal animus, and that said 23 hours of confinement met “international standards”.

“She has been detained under normal conditions,” he told the Guardian. “The process has gone as smoothly as possible. I have not delayed the case.”

Castellanos’s co-complainant Ricardo Méndez Ruiz, the president of the Foundation against Terrorism – who is also blacklisted by the US government for corruption – said on Twitter: “We are motivated by justice, for it never to be manipulated again by criminals disguised as judges, prosecutors or journalists.”

Among the targeted crime fighters is Juan Francisco Sandoval, the former director of Feci who worked closely with Laparra and Cicig. He fled Guatemala in July last year to avoid arrest after being fired for alleged insubordination by Porras, and is currently exiled in Washington.

Sandoval said that the accused law enforcement officers were victims of “political persecution by an authoritarian regime”.

“It’s a clear message from the political and economic power brokers that never again should corruption cases be investigated – or the consequences will be prison or exile,” he told the Guardian.

The current pattern of persecution has parallels to the situation after Guatemala’s 36-year civil war, which led to 200,000 mostly Indigenous civilians deaths between 1960 and 1996, and left the country’s economic, political and military institutions under the control of criminal networks and parallel security structures.

The UN established Cicig in 2017 to help dismantle these structures and strengthen public institutions such as the police, attorney general’s office and courts.

But after a decade of progress, Guatemala’s powerful elites launched a counter-attack in early 2017, shortly after a corruption investigation into then president Jimmy Morales and his family became public.

Leaked documents published by local media detailed a series of meetings between Morales and his allies, where a plan was made to retake control of the justice system. The plan involved ousting the US ambassador, Todd Robinson, and the head of Cicig, Iván Velásquez, and installing more pliant figures in the public ministry – the country’s equivalent of the department of justice – and the interior ministry, which controls the police.

Morales, a former blackface comedian elected after campaigning on the slogan “neither corrupt nor a thief”, appointed Consuelo Porras as attorney general in 2018 and then terminated the Cicig mandate. Last year, the extreme right took control of the constitutional court.

Last month, Rubén Zamora, an award-winning journalist and president of one of the country’s oldest newspapers, El Periódico, was detained on suspicion of money-laundering, blackmail and peddling influence.

“Despite what Guatemalan politicians think, reporting on corruption is not a crime,” said Natalie Southwick from the Committee to Protect Journalists after Zamora was remanded in custody.

The end goal, according to Alejandro Barillas, a criminal attorney at the international accountability group Impunity Watch, is to free corrupt military and political leaders like the former president Otto Pérez Molina and vice-president Roxana Baldetti by painting them as the real victims.

Barillas said: “The charges against the prosecutors, former Cicig investigators and judges are absurd, arbitrary and illegal, and part of a strategy to discredit and criminalise those investigating corruption in order to purify the corrupt.”